How to Prevent House Fires

Unsure where to begin when it comes to preventing a house fire? Start with the action items here.

This story originally appeared in the Winter 2021 Issue of This Old House Magazine. Click here to learn how to subscribe.

Your home is your haven, a place of comfort and security. But in one respect, it may hold hazards you haven’t thought much about. “People feel safest from fires when they’re at home, but in reality, that’s where they are at greatest risk,” says Susan McKelvey of the National Fire Protection Association (NFPA).

Every year, firefighters respond to some 353,000 house fires, primarily caused by cooking, space heaters, and faulty wiring. And with the prevalence of synthetic building materials and furnishings, combined with open floor plans, today’s fires burn faster than ever. “Together, these things create an ideal environment for fires to grow and spread quickly,” McKelvey says.

The Science of House Fires

Courtesy ULMuch of what we know about how house fires spread comes from research done at the Underwriters Laboratories Fire Safety Research Institute. At this 75,000-square-foot facility in Northbrook, IL, mock rooms and even entire houses are built, lit on fire, and safely observed.

Here, a few things they’ve learned in the last 60 years.

Synthetic and engineered-wood furnishings, such as sofas manufactured with polyurethane foam and MDF TV stands, burn eight times faster than items made with natural materials such as cotton batting and solid wood. As a result, homeowners today have an average of 3 minutes to get out of the house safely during a fire, compared with 17 minutes 40 years ago.Fiber cement is one of the most fire-safe siding options available: It can be exposed to direct flames for more than 15 minutes without igniting. Vinyl siding, by contrast, catches fire in as little as 40 seconds.In an attic fire, rigid closed-cell foam board (expanded polystyrene) ignites about seven times faster than open-cell spray foam insulation.A closed door can reduce the temperature in a room by 900°F and keep carbon monoxide levels 10 times lower during a fire. That’s why experts recommend sleeping with bedroom doors shut.

Put a Fire Extinguisher in the Kitchen

To lower the risk of a cooking fire, keep the cooktop clean, grease-free, and clear of clutter. If one does break out, don’t douse it with water; if grease or oil has caught fire, water will only spread the flames.

Instead, turn off the heat source, cover the flames with a pan lid, or smother them with salt or baking soda. In the unsuccessful event, it’s a good idea to have a fire extinguisher on hand. The NFPA recommends a multipurpose model that can be used on all types of fires; a 5-pound unit should be easy to maneuver but large enough to put out a small kitchen fire.

“When fighting a fire with an extinguisher, make sure everyone else is getting out of the house, and don’t put yourself in a situation where you block yourself from exiting,” warns McKelvey, who suggests asking if your local fire department offers training on how to use an extinguisher.

If it’s been years since you’ve replaced your smoke alarms, know that standards have changed. Fire code now mandates that they be interconnected. “These provide the best protection because when one alarm sounds, they all do,” McKelvey says. Older homes can use battery-operated smoke alarms that communicate wirelessly. Hardwired smoke alarms, which rely on batteries only as a backup if the power fails, are mandated in new construction and may be required during a major renovation.

All smoke alarms use photoelectric or ionization sensors to detect smoke whatever their power source. Photoelectric sensors respond faster to smoke from a smoldering fire; ionization sensors respond faster to smoke from a flaming fire. Because there’s no way to predict the type of fire that might break out, the U.S. Fire Administration recommends installing both kinds or choosing dual-sensor alarms. Since steam and moving air can trigger false alarms, mount them at least 3 feet away from forced-air registers, ceiling fans, and the entries to kitchens and full baths.

Electrical short circuits, in which current is accidentally discharged from an exposed wire, can create sparks hot enough to start a fire. Also known as arc faults can be caused by a frayed power cord or by hitting a wire when driving a nail into a wall. “This type of damage easily goes unnoticed, so it’s important to take preventive measures,” says TOH master electrician Heath Eastman. 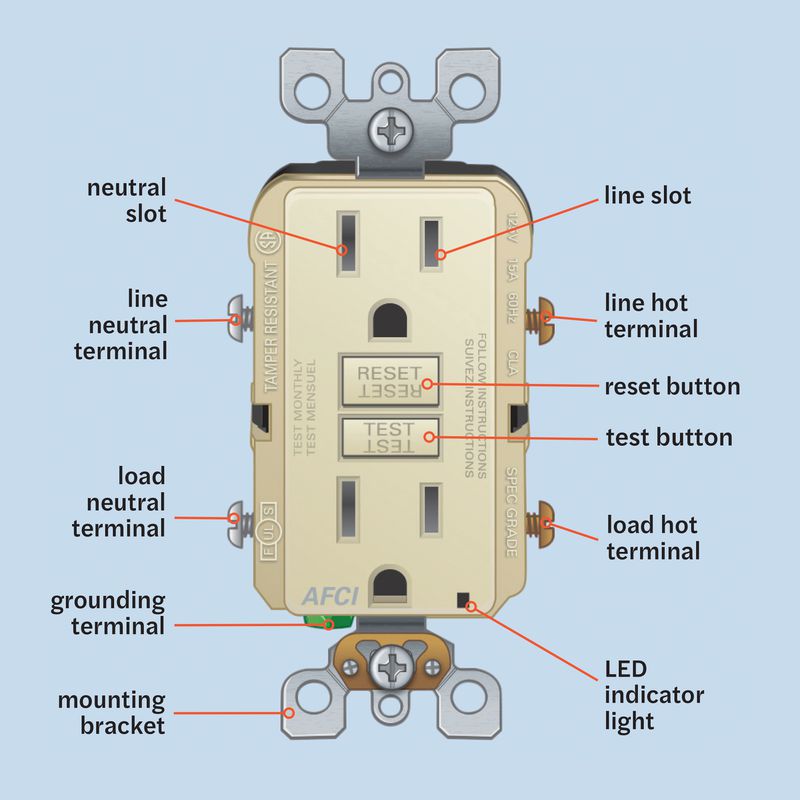 Peter SucheskiAFCIs, or arc-fault circuit interrupters, monitor the current in a circuit; if they detect an arc fault, they shut off the power along that circuit. A 2020 update to the National Electrical Code requires AFCIs in nearly every part of the house, including closets, laundry rooms, and hallways; bathrooms and garages are exempt but require ground-fault circuit interrupters (GFCIs).

AFCIs can be installed in a circuit-breaker panel by an electrician to protect the whole house or added as AFCI outlets. The latter can be a DIY fix. Not every outlet needs an upgrade; if installed on the first outlet of a circuit branch, the AFCI will protect the entire branch. If you tackle the work yourself, be sure to turn off power at the breaker to that particular outlet, and use a plug-in circuit tester to verify that the outlet is not powered before proceeding.

Once installed, AFCIs will signal you if there’s a problem. “AFCI outlets are very homeowner-friendly,” says Heath. “If everything is working properly, a green LED light at the bottom will be lit. If there’s an arc fault, the device will trip, and the green light goes out.” At that point, you should contact a licensed electrician to track down the source of the problem.

Use Space Heaters with Care

Space heaters are the second leading cause of house fires. Look for a model that has fire-prevention features such as a tip-over safety switch and overheat protection; it should also be UL or ETL listed, which means it has passed independent safety tests.

Fan-assisted heaters with ceramic or metal heating elements are good choices: They warm up a room effectively while maintaining a low operating temperature. Avoid kerosene heaters; because they use active combustion instead of electricity, they’re a fire hazard and generate emissions.

When using a space heater, follow the manufacturer’s instructions to the letter: Keep it at least 3 feet away from anything that can potentially catch fire, and never leave it unattended, including while sleeping. It should be plugged directly into a wall outlet that’s not being used to power anything else. Never plug a space heater into a power strip or extension cord; connecting a device that draws more power than the cords are designed to handle increases the electrical resistance. This, in turn, can cause them to overheat, melting the insulation and exposing the wires, which can spark and cause a fire.

Although it’s rare, piled-up oily rags can spontaneously combust: As the oil dries, it releases heat that can build up in an enclosed space. TOH general contractor Tom Silva recalls a near miss on a job site back when he was working for his dad; they had worked for hours refinishing cabinets with teak oil. “We spent the day soaking rags in teak oil, rubbing them on the cabinets, and throwing them in a pile,” he recalls. “Later that night, the homeowner called and said she smelled something funny. We drove back over and saw that, in the corner, the rags were smoldering. Another couple of minutes and they would have gone up in flames.”

Tom recommends laying individual oily rags out flat or hanging them up until dry. The dry rags should be soaked with water before disposal as a further precaution. Piles of sawdust can also spontaneously combust, and under the right conditions, airborne sawdust can be ignited by a spark. To prevent sawdust buildup, work in a well-ventilated area and thoroughly vacuum all surfaces with a wet/dry vac on a regular basis.

All fireplaces should get annual maintenance. With wood burners, cleaning the chimney flues once a year avoids the buildup of creosote, an oily by-product of wood fires that accumulates in chimneys and is flammable. “This is especially important in homes with older masonry chimneys,” says Charlie Halbert, a veteran home inspector based in Connecticut.

Mortar between the bricks deteriorates over time, resulting in gaps; if creosote residue in the chimney catches fire, the flames can spread through those gaps to the wood framing, Halbert explains. To keep your flues clean, find a chimney sweep who is certified by the Chimney Safety Institute of America (csia.org). And make sure your hearth setup is code compliant, with all combustible trim, including wood mantel and surround, located at least 12 inches away from the top edge of the firebox.

Airflow becomes restricted when a dryer’s lint trap or the exhaust duct is clogged by lint. This can cause the dryer to overheat, igniting the accumulated fibers. Clear the lint-trap screen after every load of laundry, and vacuum the slot it slides into periodically with a flexible crevice attachment.

The dryer vent should get a thorough cleaning at least once a year and as often as two or three times a year in a busy household. After disconnecting the dryer from its power source, detach the duct from the dryer. Use a dryer vent brush, available at most hardware stores, to remove lint from the full length of the duct; there are also kits with extension poles and rotary brush heads that can make the job easier.

If you still have an accordion-style dryer duct made of vinyl or flexible foil, replace it: These trap lint in the folds and are not fire-resistant. A rigid aluminum duct, installed in the shortest run possible, is safest. As a bonus, this will make the dryer operate more efficiently by decreasing airflow resistance.

If installed during construction, a sprinkler system costs an average of $1.35 per square foot. Currently, sprinkler systems for new one- and two-family homes are code-mandated in a few states, and experts expect the list to grow.

Residential systems are usually “wet pipe,” with sprinkler heads connected to pipes that offer a continuous supply of water. The pipes are either a closed or stand-alone system or integrated into the house’s plumbing. Both types rely on the house’s water supply, but a stand-alone system is often connected to a dedicated reservoir tank when drawn from a well. The sprinkler heads release water once they reach a certain temperature. The entire system doesn’t get activated when one sprinkler head goes off— only heads triggered by heat will spray.

Retrofitting a sprinkler system when you’re not renovating is more complex, as it requires opening up walls and ceilings and drilling through framing. As a result, the cost when major work isn’t already under way is about double, says Vickie Pritchett of the National Fire Sprinkler Association. But the expense may very well be worth it when you consider that fire sprinklers reduce the risk of dying in a house fire by more than 80 percent. As Pritchett says, “There’s no better peace of mind.”

Special thanks to First Alert